Women in research: An update

Women in research: An update

Women and Research, or better Women in Research, is always one of the most debated topics. Personally, I do not think that it should be such a “strange” subject to justify all this debate, but if this is still the case…Let’s do it!

Over the past 15 years, the global community has made a lot of effort in inspiring and engaging women and girls in science. Unfortunately, women are still excluded from participating fully in science. According to a study conducted in 14 countries, on the one hand, the probability for female students of graduating with a Bachelor’s degree, Master’s degree and Doctor’s degree in the science-related field are 18%, 8%, and 2% respectively. A male student, on the other hand, has a double chance to reach the first two goals and the triple possibility of reaching the third (37%, 18%, and 6%).

“We need to encourage and support girls and women achieve their full potential as scientific researchers and innovators.” — UN Secretary-General, António Guterres

Some facts and figures

The most impressive data emerge from the reading of the UNESCO Science Report: towards 2030, a report describing developments and trends in science, technology and innovation policy and developments in different areas of the world between 2009 and 2015. An entire chapter is devoted to the description and analysis of the gender gap in the various fields of science and engineering. First, it is striking how the percentage of women active in scientific research is often disconnected from the human development index of each country. In Japan, women researchers are less than 15 %, as in India and Saudi Arabia. In the European Union, they represent 33.1 % of the total, slightly higher than the world average (28.4 %), but significantly lower than in Latin America (44.3 %) and the countries of South East Europe (48.5 %). The reasons for such a jagged and unequal reality are complex and have their roots in the history of each individual country. 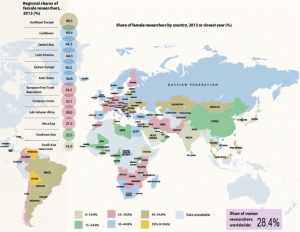 On a global level, the positive trend is that women who decide to study scientific disciplines increased proportionally more than men (+5.1 % compared to +3.3 % in the European Union). This is true not only in areas where the female presence has always been relatively high, such as medicine and biology, but also in disciplines such as engineering and in computer science. Concrete progresses have also been made in recognizing the work of scientists, both nationally and internationally; in 2014, for example, the prestigious Fields Medal for Mathematics was awarded for the first time to a woman, the Iranian woman Maryam Mirzakhani.

However, a combination of factors still makes the professional growth of women in STEM challenging. The report shows, for example, that women face more difficulties than men in career planning in research, particularly in academia. Students and doctoral students are often disincentives to continue their studies are more severely judged and are more likely to have problems with their supervisors.

Women remain a minority in science research and decision-making”, but “Humanity cannot afford to ignore half of its creative genius.” UNESCO Director-General, Irina Bokova

In its conclusions, the UNESCO report indicates that a change of approach is necessary: Encouraging girls to study scientific disciplines is not enough, work must be done to reduce the obstacles to their professional growth and to prevent them – due to more or less obvious barriers – from renouncing to pursue a career in this field.